'National Impact' is one of the Strategic Themes of the Strategic Plan 2020-2025, which sets out the goals and priorities for the University, its faculties, departments, centres, institutes and schools.

A set of factors were identified by the University of Malta as having an important and significant national impact, namely cultural heritage and identity, the Maltese language, economic impact, overarching general challenges, the need for a skilled and competent workforce, opportunities for growth, and the effect of international rankings on the perception of the University in the Maltese society. The factors identified influence each other and together exert a potent impact on the life of the nation.

As the only public comprehensive University in Malta, the University of Malta has a crucial role in preserving and developing national culture, safeguarding cultural heritage and defending national identity. We will strive to instil in our students an awareness and appreciation of the Maltese identity and culture by building a sense of community rooted in strong democratic ideals and embracing values of tolerance, fairness and non-discrimination in today’s multicultural society. One way of achieving this objective is to ensure that, where practicable, programmes of study include an appreciation of our cultural heritage.

The rebranding of the University in 2018, with an emphasis on its official name as L-Università ta' Malta, clearly points towards the importance that the University accords to the protection and development of the Maltese language. Protecting and preserving the Maltese language must be achieved while simultaneously continuing to cherish the English language, and also promoting students’ proficiency in at least one other foreign language.
We will promote initiatives to encourage students to write both humanistic and scientific scholarly publications in the Maltese language, to continue enriching their linguistic repertoire. Such works would be published in a University research journal. We will consider creating a Maltese language version of THINK magazine to pay tribute to the work done by local scholars through our national language. We will aim to develop a language policy and offer international students and staff the opportunity to study Maltese. We will continue to promote language skills in Maltese in specific settings such as the caring professions.

The University’s impact on the national economy is mainly that of preparing suitable local human capital that is creatively empowered and culturally enriched, and which is also fit to serve the industry and the evolving labour market. We will endeavour to provide graduates in the fields of Artificial Intelligence, FinTech, Distributed Ledger Technology and other emerging domains, to support the country’s strategic direction to succeed in emergent industries.

The University will revisit its processes of internal quality assurance procedures, with a view to finding a balance between ensuring academic standards and an efficient approval system. Although the scope of academic education is broader than responding to employment needs, we will aim to expand activities that promote entrepreneurial education and practice.

Malta faces some challenges related to its present successful wealth generation, which may in some instances be a result of potential social tensions arising from local multiculturalism and the quality of the physical environment associated with development. We will endeavour to actively engage with these problems through the conduct of research intended to inform and influence national policies. This strategic direction is to be complemented by the organisation of fora on issues that are of interest to the public.

Another major challenge that Malta is experiencing is the lower percentage of students pursuing higher education and the effect this has on the labour market. The University will consider its admission requirements with a view to encouraging enrolment across different disciplines.

Responding to the Knowledge and Skills Gap

The primary responsibility of the University is to deliver high-quality education which can transform learners into skilled and competent citizens who can sustain and grow the economy, improve the quality of life of the community, including its weaker members, and protect the social and physical environment. In a global situation that is in a state of constant and rapid flux, the University needs to provide more flexible programmes of study containing a major element of multidisciplinarity, which could cater for jobs requiring better versatility, rather than be limited by a singular and specialised focus.
Wherever possible, these programmes would respond to the personal interests and aspirations of the learner. In a small state with limited human resources, transferable skills are key to a successful future from which both the individual and the nation may benefit.

Retaining its place as the principal University on the island and a unique academic hub in the Mediterranean is a major opportunity for an institution celebrating its 250th anniversary since its founding as a public University. We will continue to reach out to the general public, the government and significant external stakeholders, including business and industrial concerns, the sporting, artistic and cultural communities and social groups requiring care and attention. Growth can be achieved by responding effectively to society’s needs and exigencies but also by creating economic niches in order for the University to diversify its income and revenues. We will remain favourably disposed towards improving permeability for the progression of learners deriving from the vocational sector and also and especially, returning adult learners.

The University will continue to monitor and respond to national requirements in an attempt to improve its rankings in international country indices, particularly those administered by reputable institutions such as Eurostat, the World Bank, the World Economic Forum, and United Nations agencies. The indices signal gaps in performance and are an indication of areas requiring investment and resources for education and skills development.

Rankings published by reputable international institutions have placed the University among the top 4% of the world’s universities. To further improve this prestigious position, it is crucial to enhance and expand the University’s research and innovation outcomes. The University will seek networking collaborations with reputable European universities in order to take part in ambitious and well-funded research projects that can lead to better prospects for innovation and the commercialisation of intellectual property. 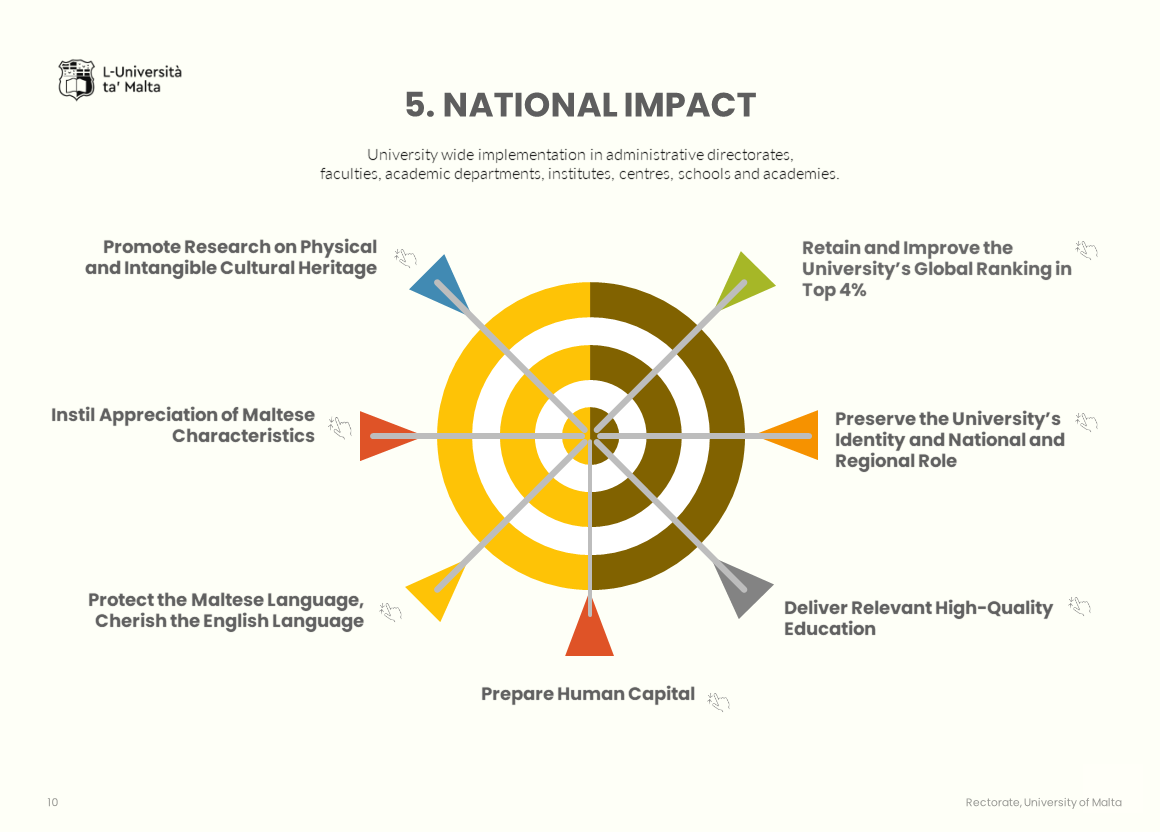 The Strategic Development Process for the University of Malta is organised by the team dedicated to Strategic Planning and Enterprise. We constantly seek feedback to improve and evolve our strategic planning process, whilst identifying opportunities to assist students and staff in meeting University's objectives.