The University of Malta is among the top 10 Universities in which senior EU officials studied before joining EU institutions and bodies.

This result emerged from a study compiled by POLITICO Europe (a joint-venture between POLITICO LLC, based in the USA and Axel Springer, the leading digital publisher in Europe), a non-partisan politics and policy news organization.

The share of EU officials in the sample who attended the University of Malta during their educational career stood at 1.8% (see figure), placing the University in 9th place among the top 25 universities. 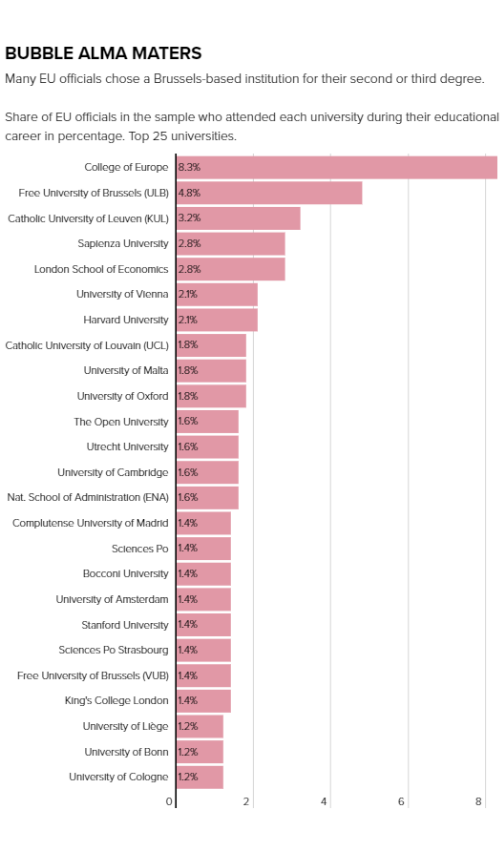 Alumni of the University of Malta include scientists, architects, thinkers and medical professionals of international repute, such as Edward de Bono, Gauden Galea and Richard England.

The results should be interpreted in the context that Malta is the smallest EU member state in terms of population and joined the EU in 2004 together with 9 other countries.

To compile the study, POLITICO used a unique dataset on the educational background of more than 600 individuals including 450 senior EU officials at director, deputy director, and head of unit level within in the Commission, the Council (including senior diplomats) and other EU bodies from publicly available sources.

According to the study, the average senior EU official is a 57-year-old man with at least two degrees, one of them in law. Over 80% of EU officials have a master's degree or higher degree (including PhD).

This favourable ranking pays testament to how the University successfully propels professionals into their careers, and how their valuable work goes on to have considerable impact on our society and beyond, said University of Malta Rector, Prof. Alfred J. Vella.

The full study is available online.