At the start of the second edition of the ‘State of the Nation’ national conference at the Verdala Palace, statistics expert and University of Malta lecturer, Dr Vincent Marmarà, is presenting the results of the scientific survey on the evolution of the Maltese national identity. The survey was conducted between the 28th of April and mid-May of this year on a sample of 1,064 people aged 16 and over.

Dr Marmarà explained that this study showed the extent of the effect of the pandemic restrictions on people’s lives, as this year the people stated that they are happier than last year. On the other hand, he noted that inflation is also having an impact on the people which is reflected in an increase in the number of people who said that their financial situation today is worse than a year ago. During the presentation of the survey, Dr Marmarà pointed out how important the role of the family is, including in decision-making. It showed that the people believe in God but do not give the same level of importance to religion and that they care deeply about the Maltese nation. However, Dr Marmarà said that the people are associating themselves with Europe more than they were a year ago. 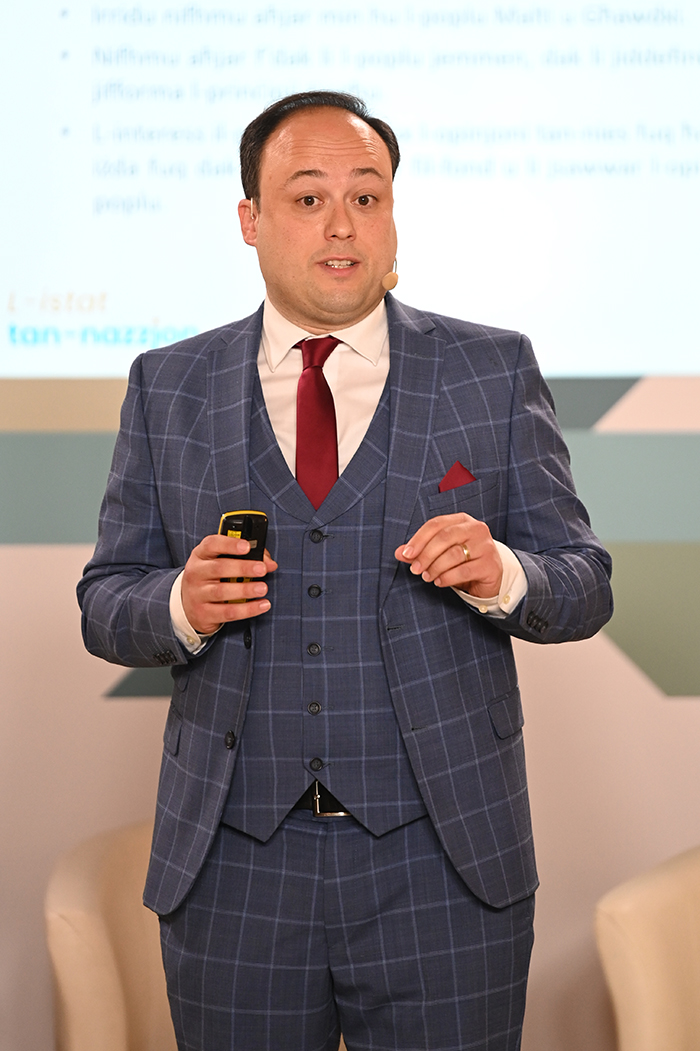 Despite the survey being conducted one month after the general election, Dr Marmarà said that the people feel that politics is less important and took the opinion of the political party less into account before forming their own opinion. Dr Marmarà also pointed out that the people are longing for village feasts, which are considered to be the most important element in the Maltese culture.

The strategic communications consultant, Lou Bondi, said that the results of this year’s survey can be compared with those of last year. “If this initiative is continued in the coming years, the picture will obviously be clearer and clearer. Above all, every year we will get to know better, and with the facts in hand, where this nation is heading”, added Mr Bondi.

Regarding the topics chosen for this year’s conference, Mr Bondi said that they were acutely relevant to the state of the nation: the environment, the media, corruption, the state’s architecture, and the tendency to look at many matters from opposing views. He added that the selected speakers will once again come from different walks of life for a rich and innovative discussion, rather than a sterile one between experts.

At the opening of the one-day national conference, the President of Malta, George Vella, pointed out that this year’s survey does not detract from what we learned last year. “The topics and subjects that will be discussed in the coming hours are intended to build on what we learned about ourselves last year, so that we have an increasingly clear and complete picture”, added the President.

Referring to the topics discussed, President Vella said that they are current and even a little provocative because they directly affect our daily lives both as individual citizens and as a people collectively. The President referred to another presidency project addressing national unity. He stated that he intends to identify, through the survey, those areas which we need to further tackle together to further improve the quality of life, and not only from an economic perspective.

President of the European Parliament, Roberta Metsola, also addressed the conference. The ‘State of the Nation’ National Conference is being held for the second successive year on the initiative of Mr Lou Bondi and Dr Vincent Marmarà, in collaboration with the Office of the President.