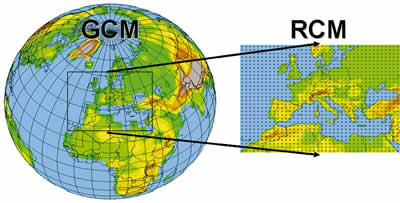 The CRG currently has two RCMs (PRECIS & RegCM4) and two Numerical Weather Prediction models (WRF & Enviro-HIRLAM) installed and running on the computer cluster, ALBERT at the University of Malta.

The RCM PRECIS (Providing REgional Climates for Impact Studies) was developed by the Hadley Centre in the UK and uses the HadRM3P (Hadley Centre Regional Model version 3P) model driven by boundary conditions, most of which are extracted from GCM outputs. It was originally designed to run on a LINUX PC with a simple user interface to produce high-resolution output for any part of the world. It has been recently modified to function on multiple processors at a time (12 is the current maximum). Because of this feature, Mr Norbert Bonnici with the help of Dr Louis Zammit Mangion from the Department of Physics, has successfully set up the most recent PRECIS model (version 1.9.2) on the computer cluster ALBERT (with more than 700 processors) to run several simulations with 12 processors at a time. PRECIS can be run with two resolution settings (50 km and 25 km) and up until now, it has been used at 50 km by the CRG and the Department of Physics for several Undergraduate projects by running it over the European and Australian domain. At the moment, it takes the model about 11-17 days to run a 30 year simulation and the output takes up about 200-300 GB of storage space.

The RegCM4 (Regional Climate Modelling system version) was originally developed by the National Centre for Atmospheric Research (NCAR) and is currently being maintained in the Earth System Physics (ESP) section of the Abdus Salam International Centre for Theoretical Physics (ICTP) in Trieste, Italy. The first version, RegCM1 was released in 1989 and has undergone major changes since then, leading to the current version, released in 2010. This is a community based model and is currently supported by the Regional Climate Research Network (RegCNET) so that everyone can contribute and help improve this model for the better of the community. Various improvements are currently being implemented and should be released in upcoming versions of the model. RegCM4 was designed to run on multiple processors depending on the grid size and horizontal resolution of the chosen domain. The model can run simulations at various resolutions ranging from 50 km to 10 km and takes 8-10 days to run a 30 year simulation at 50 km, and the output takes up about 1.8 TB of storage space. The Department of Geosciences is currently running the most recent version of the model, RegCM4.5.

The Weather Research and Forecasting (WRF) model is a next-generation mesoscale numerical weather prediction model currently maintained in a collaborative partnership, principally among the National Center for Atmospheric Research (NCAR), the National Oceanic and Atmospheric Administration (the National Centers for Environmental Prediction (NCEP) and the Forecast Systems Laboratory (FSL), the Air Force Weather Agency (AFWA), the Naval Research Laboratory, the University of Oklahoma, and the Federal Aviation Administration (FAA). WRF is capable of doing operational forecasting and atmospheric research. It features multiple dynamical cores, a 3-dimensional variational (3DVAR) data assimilation system, and a software architecture allowing for computational parallelism and system extensible to domain sizes ranging from meters to thousands of kilometers. WRF allows researchers the ability to conduct simulations reflecting either real data or idealized configurations. WRF provides operational forecasting a model that is flexible and efficient computationally, while offering advanced physics, numerics, and data assimilation contributed by the growing research community.