Comets are bodies composed of rock, ice and dust. They are visitors from the distant reaches of our solar system. As a comet comes close to the sun, it warms up and the icy surface vaporises, resulting in a coma surrounding the nucleus. While the nucleus itself is typically only a few kilometres wide, the coma extends for several thousand kilometres. Gasses and dust are expelled, creating the tail they are known for. In fact, oftentimes we can observe two tails: a dust tail that reflects sunlight and an ion tail that glows blue via the ionisation of gasses. In turn, the dust left behind by comets results in meteor showers (i.e. shooting stars). When Earth happens to intersect with such ‘leftover’ dust, these grains burn upon impact with our atmosphere, leading to scurrying lights in the sky.  Thus, different comets are responsible for different meteor showers. For example, the famous Perseids in August are due to Comet 109P/Swift-Tuttle while the Orionids of October/November due to comet 1P/Halley. 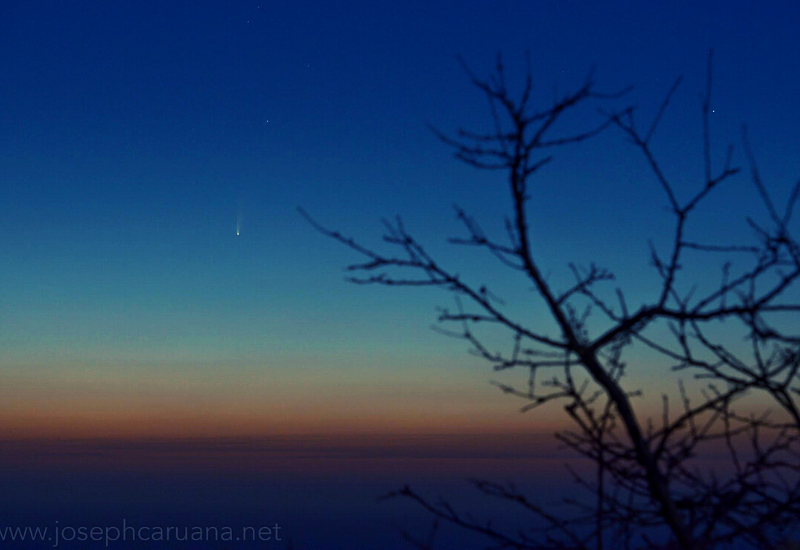 Many comets do not survive the approach to the sun and end up disintegrating. In the case of Comet NEOWISE, the worst is over, for it made its closest approach to the sun on the 3rd of July. It will come closest to Earth on the 23rd of July, as it continues on its journey back to the distant, outer reaches of our solar system. Over the coming few days the comet will continue climbing higher in the evening northwesterly sky. While it will become less active as it moves further away from the sun (so one might expect it may grow dimmer), the comet will keep moving closer to our planet until the 23rd of July, so essentially it is a balance of these two factors. Also, the sky away from the horizon is clearer, so that can also help with observing the comet. One hopes it will remain visible to the naked eye for the rest of this month. 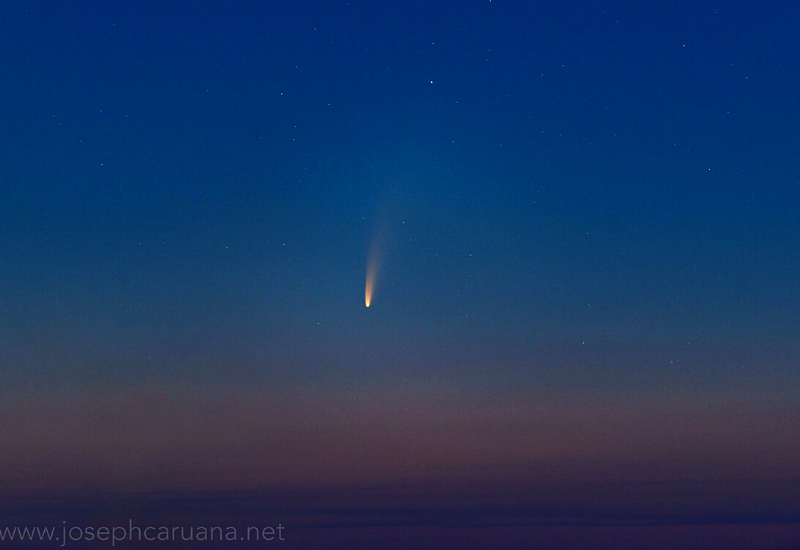 The very title of a comet conveys useful information about it. As an example, let us consider the full name of this present comet: 'C/2020 F3 (NEOWISE)'.  ‘C’ means that it is not periodic, in the sense that it does not revolve around the sun with a period less than 200 years.  In fact, this comet last passed by around 4,500 years ago, right around the end of the Temple Period in Malta.  Having had its orbit modified during the current passage, it will not return for another 6,800 years. ‘2020' denotes the year of discovery. Next we encounter another letter.  This gives more detail about the time of discovery. Each month is divided in two halves.  Thus, the first half of January is assigned the letter A, while the second is ascribed the letter B. In a similar fashion, February carries the letters C and D, March E and F, and so on.  Therefore, the ‘F’ in this comet's title means it was discovered in the second half of March. The number ‘3’ following the letter ‘F' means that this was the third comet to be discovered in that period. Finally comes the comet’s nickname. Had this been discovered by an individual, it would carry their name (e.g. ‘Halley’). In this case, the name is that of the telescope that made the discovery - NEOWISE. 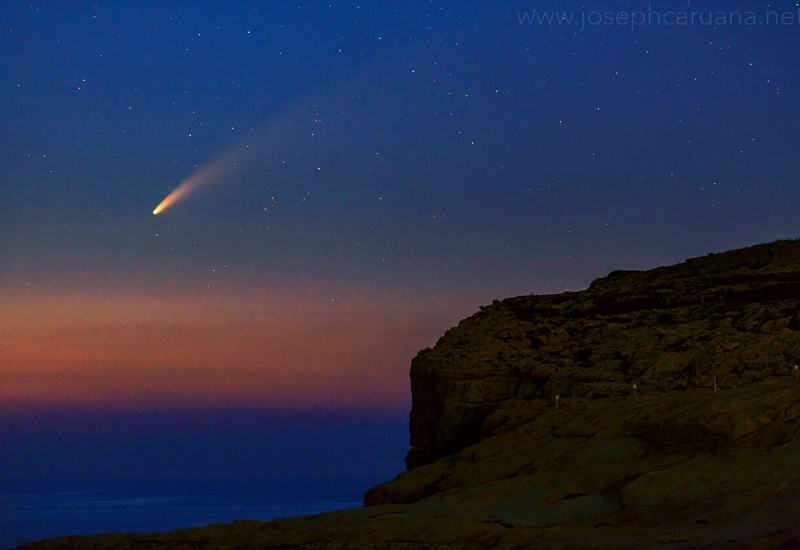 Comet NEOWISE was discovered using the NASA Wide-field Infrared Survey Explorer (WISE), a space telescope that surveyed the sky in four infrared wavebands. Once this space observatory had run out of its hydrogen supply (which is used to cool the telescope for such observations), its mission was extended by a few additional months for a different purpose, namely learning about near-Earth objects (NEOs) and comets.  At this point it was renamed NEOWISE. 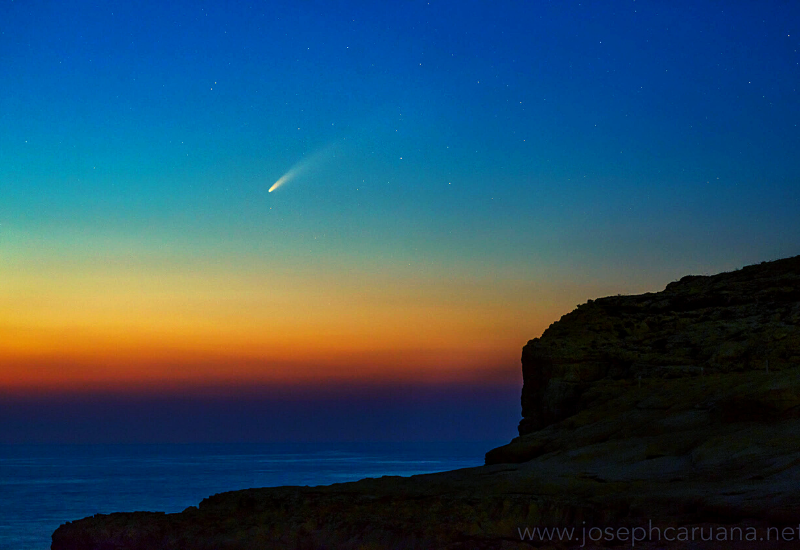 The chart below shows the location of the comet (marked with circles) over the next few days at 21:30 local time. It is easiest to look at the northwest, locate the brighter stars of Ursa Major - the so-called ‘Plough’ or ‘Big Dipper’ - and use them as an approximate guide for the comet’s position on a given day.  Although the comet is a naked-eye object, a pair of binoculars would make the task even easier and offer a better view. 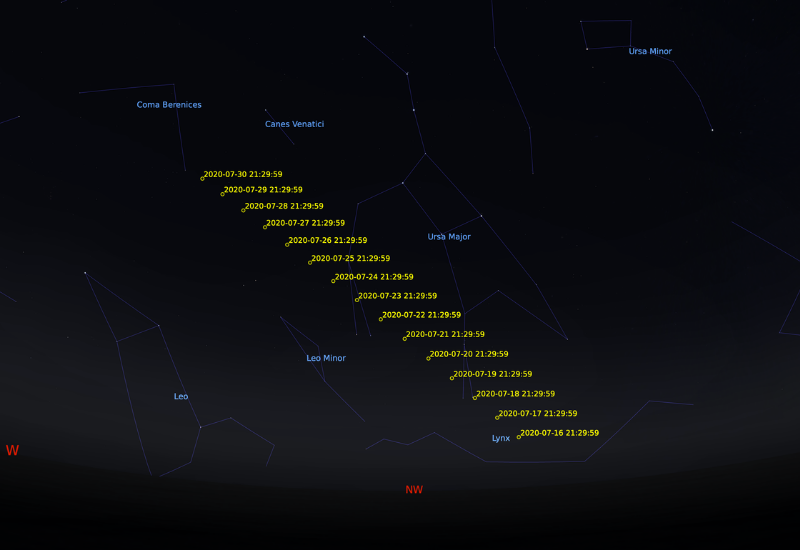 (Many thanks to Dr Joseph Caruana from the Institute of Space Sciences & Astronomy for having shared these shots!)