Air quality researchers from the Department of Chemistry, Dr Noel Aquilina and the Department of Geosciences, Dr Sara Fenech, at the University of Malta, have recently published a study in an internationally, peer-reviewed journal on the population exposure to a regulated air pollutant, nitrogen dioxide (NO2) in a densely populated area of the Maltese Islands, the Northern Harbour district. Read more.

Findings from a previously published study in Malta indicated that the highest exposure to NO2 occurs in this densely populated district. Within the Northern Harbour district, 151,664 inhabitants (as of December 2017; NSO, 2019) are distributed across the cities (and hamlets) of Birkirkara (highest population), Balluta, Guardamangia, Gżira, Ħamrun, Madliena, Msida, Paceville, Pembroke, Pieta`, Ħal Qormi, San Ġwann, Kappara, Santa Venera, Sliema, St. Julians, Swieqi and Ta’ Xbiex (lowest population). This district occupies 24.1 km2 or 7.6% of the whole territory.

This district is characterised by a continuously changing urban fabric with residential and working population totals on the increase for the past five years. No local policies have been targeted to address local personal exposure and any evidence is lacking. An adequate estimation of personal exposure to pollutants usually requires the recruitment of a substantial amount of people, accompanied by hefty logistics and chemical analytical costs.

Although the annual limit of 40 μg m−3 for NO2 concentrations was not exceeded in any of the ERA air quality stations in the Maltese Islands between 2009 and 2017, no statistically significant reductions were observed in Msida (the traffic station, representative of this district) across these years. In this publication, the population exposure associated with the long-term exposure to NO2 concentrations, was estimated by a novel, dynamic modelling approach. The estimation of the hourly movement of people in different microenvironments (MEs) (defined by the 2012 Copernicus European Urban Atlas Land-Use and Land Cover dataset) was used to estimate the total population exposure to hourly NO2 concentrations (in 2017). The district is divided into four MEs; Home, Work, Work and Traffic. The activity profiles representing the movement of the population across the different MEs over time were created based on local habits and characteristics. Taking into account that NO2 infiltrates in the indoor MEs (work and home) this study presented also the first estimate of indoor NO2 exposure of outdoor origin within the district.

This study can be used as the basis for other studies needed to understand further the chemical composition in particular conurbations and the associated indoor pollution. 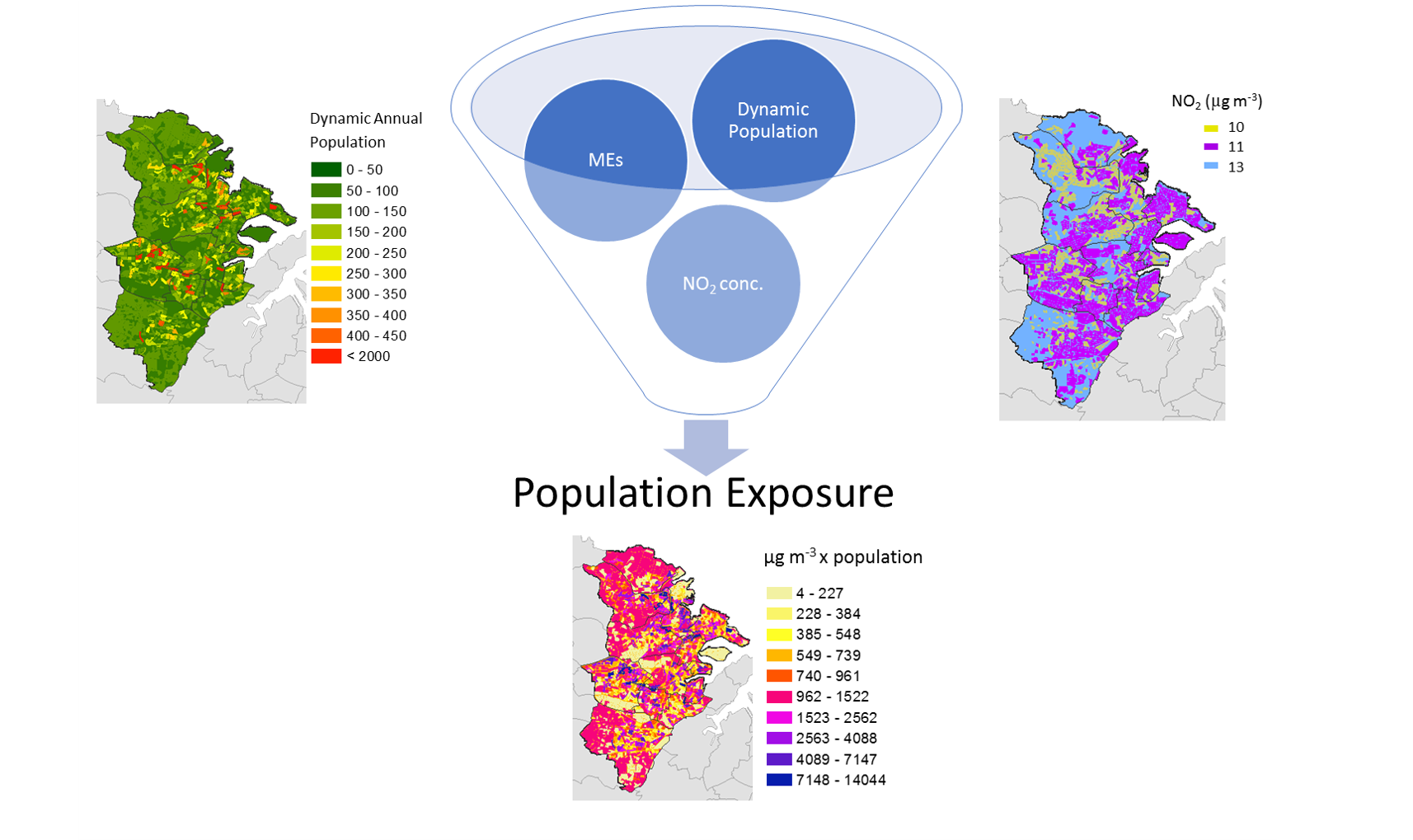