Nothing works better than real-time data, providing information on the spot as it is acquired. In this particular case we are dealing with the temperature of the sea, measured every hour at an open sea station by a small buoy deployed at 2 nautical miles offshore Marsalforn, relaying data by satellite to a land station, monitoring the detailed evolution of the sea surface temperature in the coastal seas of the Maltese Islands as we inexorably experience an intensely hot summer.

The flux of solar radiation associated with the high air temperatures since July has naturally also affected the sea which is experiencing one of the strongest marine heat waves measured in recent years. The sea surface temperature (SST) has been on the high all around the Maltese Islands, reaching values well beyond 29oC and peaking above 30oC on Saturday and Sunday in two hot spots, Marsalforn and Xlendi. Such a uniquely intense marine heat wave had already been experienced in July 2017, but this year its duration persisted over a number of days as wind and wave activity remained on the low and not strong enough to percolate the warmer surface waters down to the underlying layers.

Continuous SST measurements north of Gozo showed a consistent rise in the daily average water temperature from 28 oC to 29 oC in the first half of August, with strong daily variations and temperature peaks in the late afternoon, typically between 15:00 and 18:00.

Figure 1: Data from a surface buoy in proximity of Marsalforn showing a strong positive trend in sea surface temperature during the first half of August, with peaks in temperature on 14/15 August

The Physical Oceanography Research Group at the Dept. of Geosciences of the University of Malta collects this data operationally and elaborates its analysis with the aid of numerical models that provide snapshots of SST maps in nowcast and forecast modes every three hours around the Maltese Islands as they change during the day.

Contrary to a layman’s perspective, the temperature of the sea is not a uniform whole in space, but varies substantially along the Maltese coastline, with synoptic changes of even up to 4-5 oC in exceptional cases. Sea temperature is very much dictated by ocean dynamics which results in the mixing of water masses, and it is, in particular, eloquent how the sea on the southern coast of Sicily is persistently much cooler due to upwelling phenomena.

The situation around the Maltese Islands is in continuous evolution and by Thursday 19 August a rising swift north-westerly wind will suck cooler bottom water vertically upwards against the southern coast of Gozo and Malta, resulting in an average 2 oC lowering of temperature with respect to the northern coastline where temperatures would still remain above the climatological average. The Physical Oceanography Research Group, led by Prof. Aldo Drago, specialises in the real-time monitoring of the marine environment providing essential marine data services for research and for operational use by local stakeholders. It also dedicates this effort to enable climatological assessments. Dr Adam Gauci is the responsible for the running of field observations. 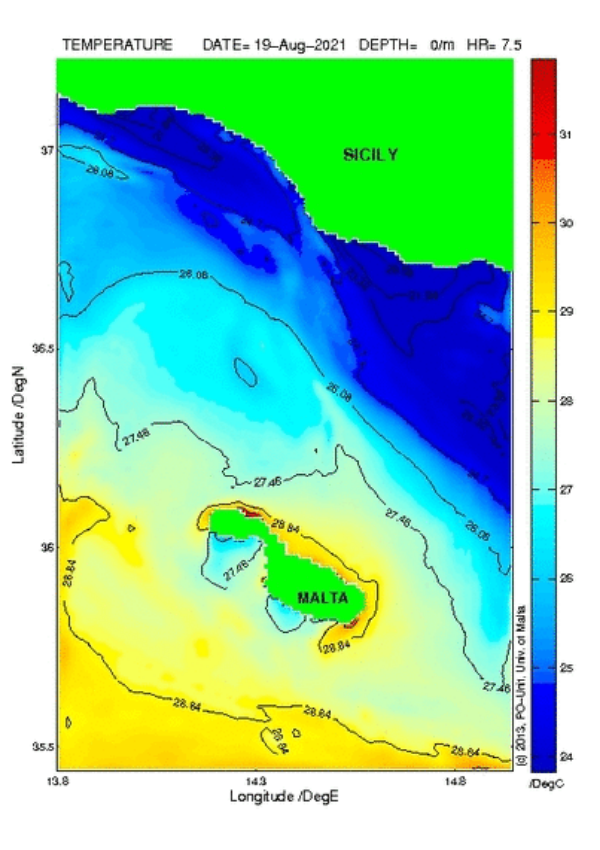 The Physical Oceanography Research Group is also the Maltese partner in SHAREMED, a strategic project partially funded by the Interreg MED Programme under the framework of PANORAMED. The ultimate aim of this project is to increase the capability of the Mediterranean regional, sub-regional and local authorities, and of the research community to jointly assess and address hazards related to pollution and environmental threats in the Mediterranean Sea. One particular delivery of this project is a regional atlas which will feature information on the incidence of marine heat waves and their impact on the marine life and ecosystem in the Mediterranean.

Marine heat waves occur when warmer sea temperatures above the climatological average persist for more than five consecutive days. The frequency and the intensity of marine heatwaves in the Mediterranean have increased drastically in the last ten years leading to a reduced capacity of the marine species to recover, adapt and acclimate to the new conditions. Water temperature is a fundamental parameter for the survival of marine flora and fauna, especially for benthic organisms, unable to move, and threatens to wreak havoc in an already fragile marine ecosystem.  In coastal areas, where human activities are heavily concentrated, the temperature highs are an additional stress especially for foundation, habitat-forming species such as seagrasses, Posidonia oceanica, and many organisms which compose the coralligenous ecosystem.

Temperatures above the optimal thresholds, like those recorded in this period (> 27°C), lead to increased shoot mortality of P. oceanica, reduced recruitment rates, and damage to the photosynthetic system, decreasing oxygen production. Heat waves that occurred in 1999 and 2003 in the Northwest Mediterranean led to mass mortality outbreaks in a variety of hard substrate macroinvertebrates including anthozoans, sponges, bryozoans, ascidians, and bivalves. The key component of the coralligenous habitats, the gorgonians, were strongly impacted with mortalities reaching up to 80% of the colonies.

The gorgonians, terms which include the tree-like corals like the emblematic red coral (Corallium rubrum), are living structures protruding from the seafloor, increasing the morphological complexity of the environment, and providing structural resources for other species. Prolonged temperature increases lead to alterations in entire habitats, causing some species to shift their range in depth, such as in the case of the gorgonian populations which tend to deepen their upper depth limit, and consequently leading to more extended algal growth and higher susceptibility to the insertion of allochthonous species. The bivalves, Mytilus galloprovincialis, have been also reported to be associated with an increased mortality risk with heatwave exposure above 27°C.

Mobile species, such as fish, may respond to climate change and temperature rise by moving to more favourable regions, with populations shifting poleward or to deeper water, to find their preferred range of water temperatures or oxygen levels, and leading to depleting fish stocks, altered species competition and impacts from alien species.