An exhibition titled ‘Art Metaphor’ that bridges the cultures of the Maltese islands and the Emirates was inaugurated at the Youth Hub in the capital of the United Arab Emirates. This exhibition was organised by the Embassy of the Republic of Malta in the Emirates, spearheaded by Her Excellency, the Ambassador Maria Camilleri Calleja.

Present at the inauguration was his Highness, Sheikh Nahyan bin Mubarak Al Nahyan, who is the Minister for Tolerance and Coexistence and an esteemed member of the Royal Family. Also present were distinguished guests and Maltese expats.

The exhibition was aptly titled ‘Art Metaphor’ because of the analogies that the two female artists who participated in this exhibition managed to come up with, and who were brought together by the Ambassador herself. Being captivated by Maltese culture, Emirati metal sculptor Azza Al Qubaisi immediately accepted the invitation to participate in this exhibition and showcase a new collection of works alongside Maltese watercolour painter Anna Galea. Both artists challenged themselves to find parallels between their painting and sculpture, but not just: the exhibition is a juxtaposition of art works inspired by the Maltese Islands and the Emirates that were produced in the last eight months.

Anna and Azza held several discussions before and during the production of the artworks that were specifically produced for this exhibition. They even spent time together in the Emirates to get to know one another and to learn about their respective culture and their country’s history and customs.The result is a silent conversation that is generated between the art works that were produced and subsequently paired together by the curator of the exhibition, Dr Charlene Vella, Senior Lecturer in Art History at the University of Malta.

Anna and Azza both have impressive portfolios and have been recognised for their respective talent, inventiveness and creativity. They have both received awards in relation to their art, have been published extensively and have exhibited widely across the continents.

Anna Galea’s art is synonymous with intense, masterful, large-scale watercolour evocations of florals and landscapes, but also non-representational art. Watercolour is in fact the medium of all the artworks exhibited in this exhibition. She was a featured Masterclass watercolour demonstrator at the International Watercolor Society Conventions in Italy in 2016, and Dubai in 2018. Anna’s ‘Art Metaphor’ watercolours are colourful and fluid with a predominant use of warm colours, with a contrast of colder tones, and which are spirited and confidently-executed artworks.

Azza Al Qubaisi is a jewellery artist, sculptor and product designer, and well known as the UAE's first Emirati jewellery artist. However, London-educated Azza’s sculptures can be very large in scale and bold. Executed in steel that is at times intentionally rusted to add more interest to their surface by reflecting light off of them, the sculptures on display at Art Metaphor, also have a commanding presence. The sculptures are largely non-representational but stemming from the representational, from the natural world, implying it to create the most attractive, sinuous forms. 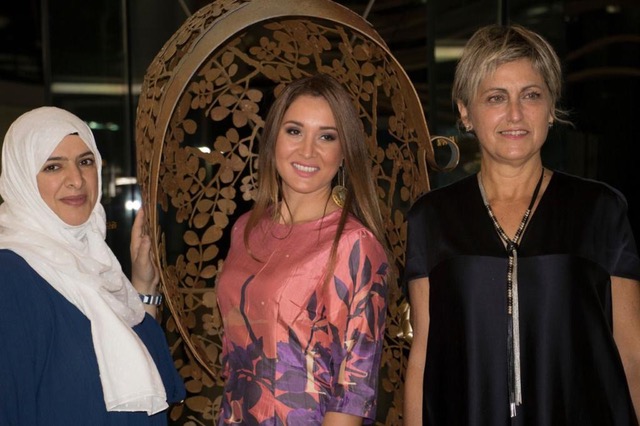 This exhibition is leading the diversity of people who live in the Emirates to explore and better contextualise the culture of the Maltese islands, as well as the Maltese language. They are able to appreciate the similarities between Malta and the UAE, and this exhibition is therefore successful in exploring and augmenting the relationship between the two countries in question.

Art Metaphor is currently viewable at the Dubai Expo 2020 until 20 November 2021, and after that, at the Embassy of the Republic of Malta in the UAE (by appointment).

The exhibition was made possible with the support of the Cultural Diplomacy Fund of the Ministry for Foreign and European Affairs of the Republic of Malta as well as Malta Enterprise.