The meteo-marine conditions in the sea domain around the Maltese Islands and the Malta-Sicily Channel experienced in the night between Friday 13 and Saturday 14 December were amongst the strongest triggered by recent storms.  A depression on the Adriatic Sea produced a steep atmospheric pressure gradient over the Central Mediterranean leading to north-westerly gale winds reaching up to 22 m s-1 (about 50 mph) in the open sea areas close to Malta and Sicily on Saturday morning.

These extreme conditions were predicted and assessed by numerical atmospheric and wave models which verified the evolution of the storm, accompanied by torrential rain especially in the sea north of Malta, and by very high waves reaching a significant wave height of 7m west of Gozo where the exposure to Mistral wind is conspicuous.  Such extreme wind and wave conditions are known to have a return period of the order of 10 years. These very adverse conditions started to attenuate on Saturday afternoon when the depression moved on to the Aegean.

The Physical Oceanography Research Group (PO.Res.Grp) specialises in the operational running of several numerical models that simulate and make predictions of atmospheric conditions and sea states. These models provide detailed spatial and temporal information in the form of maps showing how meteo-marine essential parameters like wind, precipitation, air and sea surface temperature, sea currents and waves are changing. This service is provided in real time from a dedicated portal to many national stakeholders that need such data for their operations, and to general users by means of a smartphone app called KAPTAN.

While other meteo services provide average conditions for a domain covering for example the whole Maltese Islands and the coastal sea areas, the service offered by the PO.Res.Grp gives spatial details of how these conditions change from place to place in the approaches to Malta and Gozo, and in the stretches of sea beyond. Several of these models have been upgraded or developed under the CALYPSO series of projects, the most recent project being CALYPSO South which is partially funded under the Interreg V-A Italia-Malta programme 2014-2020.

The damages reported on land were considerable, but what was witnessed on land cannot be in any way compared to the force and vehemence experienced at sea. Luckily the western coast was hit this time, with waves exhausting their energy against the high standing cliffs and this relatively uninhabitated stretch of coast of Malta and Gozo, otherwise the consequences would have been much worse. 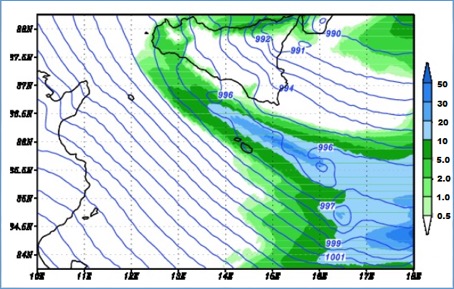 Figure 1: Precipitation (in mm over 3h) predicted for 1am (local time) on 14 December 2019 in the Central Mediterranean. Isolines show curves joining points of equal atmospheric pressure in millibars. Data produced by the MARIA/eta model run by the Physical Oceanography Research Group, Dept. of Geosciences, University of Malta 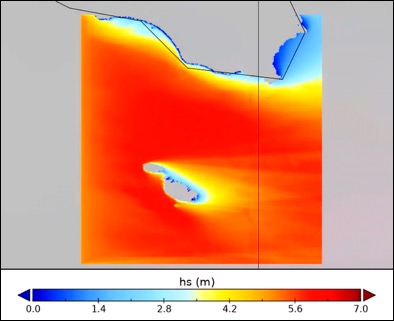 Figure 2: Sea wave heights higher than 7m west of the Maltese Islands and in the Malta-Sicily Channel. Simulations by the ROSARIO-SWAN numerical model run by the Physical Oceanography Research Group, Dept. of Geosciences, University of Malta for the morning of 14 December 2019