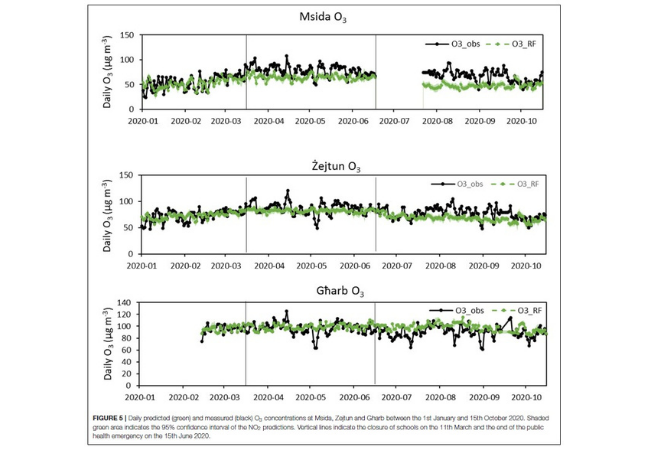 Dr Noel Aquilina, from the Department of Chemistry, Dr Sara Fenech, from the Faculty of Science and Mr Ryan Vella from the European Space Agency, were invited to submit research in a special edition of the journal Frontiers – Cities in Lockdown: Implications of COVID-19 for Air Quality and Urban Environmental Health.

The accepted publication had three objectives:

A random forest machine learning algorithm was used to determine a business as usual counterfactual scenario, to aid a robust comparison with observed air pollution levels during the pandemic. The model was trained with meteorological data between 2008-2017 provided by the Malta International Airport and air pollution data from the Environment and Resources Authority (ERA). The model was then used to predict the 2020 daily NO2 and O3 concentrations by using the measured 2020 meteorological data.

In this study, daily NO2 and O3 data, recorded by the ERA air quality monitoring network stations were used. The locations studied were the traffic hotspot at Msida, the urban background area at Żejtun and the rural setting of Għarb in Gozo from 1 January 2020 till 15 October 2020.

Using traffic data collected by Transport Malta at Blata l-Bajda and Gudja it was noted that in 2020, a 50% decrease in traffic counts was observed in April when compared to 2019, resulting fromthe restrictive measures due the Public Health Emergency starting from 11 March 2020. On easing the restrictions on the 15 June 2020, traffic started to increase steadily and reached the 2019 levels by 7 October 2020 when schools were reopened.

The difference between the predicted business as usual scenario levels and actual measured pollutant levels was calculated. A decrease of up to 54 % in the monthly mean NO2 concentrations was registered in Msida (in April). Increases in NO2 levels were also observed in Żejtun (up to a decrease of 57 % in June). As expected, in Għarb, the NO2 levels did not vary substantially throughout the year.

A reduction in NO2 concentrations across the Maltese Islands was also observed from satellite measurements of monthly average NO2 vertical column densities.

Photochemical activity determines the formation of O3 in cities. O3 production increases in polluted urban areas (with high-NOx and high-Volatile Organic Compounds emissions, mainly associated with traffic exhaust) as is the case at Msida. At this traffic site, during the pandemic months, an increase of up to 61% in O3 was noted compared to the business as usual scenario. In the urban background site of Żejtun, we observe a 20 % increase O3 concentration in September 2020. In Għarb, O3 decreased by up to 11 % compared to a business as usual scenario. These differences are statistically significant and brought about by the non-linear chemistry between NO2 and O3.

Our results also highlight that while policies to reduce one pollutant such as NO2 could be beneficial, this will inevitable alter the atmospheric chemical balance and may lead to increases in other pollutants such as O3. Thus, in a future where 03NO2 emissions are targeted to decrease by similar levels to those observed during the pandemic, the burden to control 03 levels will be enhanced. Therefore, policies should focus on limiting 03 precursors which are not routinely measured across Europe.