Call for expert: numerical modelling for the ShareMED project

Call for expert in numerical modelling for the ShareMED project

The Physical Oceanography Research Group (PO.Res.Grp) within the Department of Geosciences of the University of Malta is the Maltese partner in ShareMED, a strategic project funded by the Interreg MED Programme under the framework of PANORAMED. The ultimate aim of this project is to increase the capability of the Mediterranean regional, sub-regional and local authorities and of the research community to jointly assess and address hazards related to pollution and environmental threats in the Mediterranean Sea.

One of the ShareMED activities envisaged under WP3.1 for development, WP4.5 for testing, and WP5.1 for transfer of technology, consists in the relocatable operational system for short-term forecasts of oceanographic conditions (both hydrodynamic and biogeochemical) based on the coupled MITgcm-BFM model.

This work will be done in close cooperation with the National Institute of Oceanography and Applied Geophysics - OGS, who currently runs the Med scale biogeochemical analysis and forecasting system and will be developing the relocatable system within the ShareMED project. The relocatable modelling system will be set up at selected study sites in the Mediterranean, one of which being the Sicilian Channel.

The planned model domain is shown in Figure 1 although this may be altered to match computational resources. The extent of the domain is chosen such that interconnection and fluxes with the rest of the Mediterranean is adequate, and includes the Strait of Messina which is believed to have significant impacts on both the dynamics and biogeochemical aspects on the eastern Sicilian coast and the eastern part of the Malta-Sicily shelf next to the Malta slope. 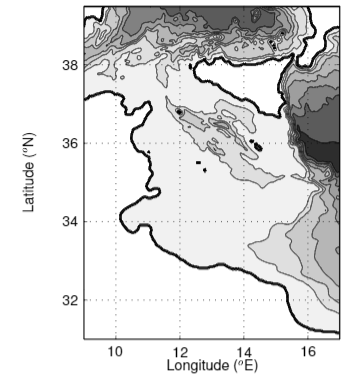 The PO.Res.Grp requires the services of a numerical modelling expert to assist in this project activity. The selected expert is expected to have a track record on numerical modelling of marine systems through the engagement in similar previous activities, preferably supported by relevant publications. The expected skills comprise a solid command of Fortran programming, high proficiency in working with High Performance Computing (HPC) platforms, Linux operating systems, and running of operational codes, as well as a good command of software processing tools like Python and Matlab.

All the work and model implementation will be conducted in collaboration with the OGS modelling group. The expert will be working with the staff of the Physical Oceanography Research Group under the direction of Prof. Aldo Drago, the Maltese ShareMED project responsible. Initially the prototype model will be set up on the HPC facilities already in use by OGS; in a second stage the system will be relocated on the computing system of the University of Malta where the developments and running codes will reside and where all derived materials such as codes and results will be archived. Moreover, the work will be conducted in collaboration with designated staff of the Physical Oceanography Research Group who will be trained to interpret and have a handle on all the model components and its operational delivery. This staff from the PO.Res.Grp will be dedicating direct time to contribute to the activity.

The consultant is expected to work and follow the implementation of the activity in all its phases, namely:
Phase 1: development and initial fine tuning;
Phase 2: relocation and testing on the Malta server with further fine tuning, and
Phase 3: validation

The engagement is expected to run over seven months September 2020 to March 2021 although this schedule may be expected to alter by a few months depending on the project implementation needs.
The consultant is expected to work mainly remotely, but will need to travel (for at least two periods of about one week) to Trieste or Malta when necessary. Travel will be paid by the PO.Res. Grp outside this contract.

The remuneration of this work is expected to be a maximum of 10,000 Euro (excluding VAT). The selection of the consultant will be done by a designated committee from the University of Malta.

Progress reports are expected on a bi-monthly basis. Descriptions of the model code and its operation are expected during the implementation of the activity. At the end a detailed report is expected which describes the system and details the operational running methodology to be executed by local staff at the Physical Oceanography Research Group.
The consultant is expected to submit any further technical reports as requested by the Maltese project responsible, Prof. Aldo Drago.

Payment will be done in three tranches: 30% upon signature of contract, 40% after execution of phase 2, and remaining 30% upon completion of the full work.

To apply kindly send an email to Prof. Aldo Drago.