About 100 people (citizen scientists) of all ages and backgrounds made Maltese history over the last weekend of August 2022 by participating in Malta’s first-ever BioBlitz. The focus of this Citizen science event was finding and identifying as many species as possible in a specific area over a short period of time. For this national first, the targets were Invasive Alien Plants which are those plants not indigenous to Malta. These may have been accidentally or deliberately introduced, of which some are spreading and can present a threat to local biodiversity.

This BioBlitz was organised in the core of the forest area of Buskett and Girgenti by the EU Funded project FAST (Fighting Alien Species Trans-border), in collaboration with Science in the City and with the support of the ERA and Ambjent Malta. This Natura 2000 site was specifically chosen for its abundance of alien species and the threat they represent to local communities.

Citizen scientists involved in this Bioblitz made over 270 records of alien plant species in just three days. These observations were then reviewed and curated by the University scientific team involved in this project and were used to build a distribution map showing the locations of these potentially dangerous species. The data gathered during this event were then handed over to the entity responsible for Buskett and will facilitate the future management of this Natura 2000 site. 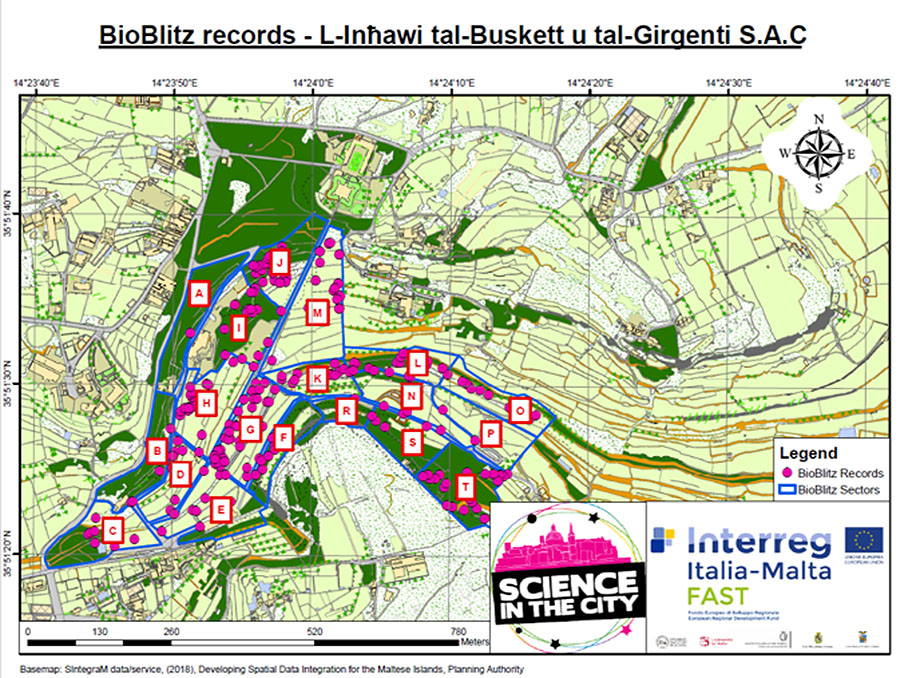 The organising team of this BioBlitz, namely Prof. David Mifsud, Mr Arthur Lamoliere, Ms Simone Cutajar and Mr Daniel Mangion, noted that “Citizen science can significantly contribute to the conservation of threatened ecosystems, by making it possible for everyone to detect and report alien species before they become problematic for local communities. It is also a great opportunity for all of us to engage with science and conserve our biodiversity”.

The point behind Citizen Science events, such as BioBlitzes, is not simply to give an opportunity to everyone to learn and collect relevant data, but also to have fun with family and friends and being surrounded by nature. As one of the Citizen Scientists aptly said, "It was a great afternoon well spent - enjoying the beautiful views of Buskett while also collecting information that will help keep it safe."

This BioBlitz was organised by the University of Malta, Project Partner of the FAST project. This project actively protects biodiversity by gathering information on the alien species of Malta and Sicily. This project is part-financed by the European Union European Regional Development Fund (ERDF), through the INTERREG V-A Italy-Malta Programme. Co-Financing rate 85% EU Funds, 15% National Funds.